[Editor’s Note: Every so often, we at Between the Times wish to share with our readers especially important thoughts. Such is the case today. This post is by David E. Prince, Pastor of Preaching and Vision at Ashland Avenue Baptist Church and Assistant Professor of Christian Preaching at The Southern Baptist Theological Seminary.]

On Aug. 28, 1963, from the steps of the Lincoln Memorial, Martin Luther King Jr. took his place alongside Abraham Lincoln as a preeminent shaper of American culture when he delivered his “I Have a Dream” speech to 250,000 civil rights supporters. The most oft quoted line of the famous speech is, “I have a dream, that my four little children will one day live in a nation where they will not be judged by the color of their skin but by the content of their character.” Some have appropriated King’s words (wrongly I think) to argue that a colorblind society should be our ultimate goal.

King was arguing for racial equality, which does not necessitate a colorblind society. He uttered those words in a context where sinister Jim Crow laws legally codified the message that white skin meant a man was inherently superior and black skin meant a man was inherently inferior, even something less than a man. King’s rhetorical masterpiece publicly exposed the hypocrisy of America: A country founded in liberty as the land of “freedom and justice for all,” subjugating a people for no other reason than the shade of their skin.

“Separate but equal” was the bankrupt cry of segregationists opposing the Civil Rights Act of 1965. The segregationist mindset has been largely repudiated in American culture. Tragically, the one time in which America still functions as a segregated society is on Sunday morning. One article, “Race, Diversity, and Membership Duration in Religious Congregations,” published in Sociological Inquiry (July 2010) found that 90 percent of congregations in the U.S. are segregated (a single racial group accounts for more than 80 percent of membership). That Sunday morning worship is the most segregated hour of Christian America has become cliché, but it is largely true.

The usual defensive response when these facts are mentioned is that we all believe in racial equality, but we cannot help the fact racial groups have different preferences when it comes to worship, preaching and how church is done. In other words, we may be separate but we’re equal, so it’s nothing to worry about. After all, we reason, if someone of another race wants to attend our church, we would be glad to have them, so there is no problem here. Thus, tolerating racial and ethnic diversity amounts to doing our Christian duty.

Sociologist of religion, Rodney Stark notes that the city of Antioch, during days of Roman rule, was divided into 18 different and intensely antagonistic ethnic groups with almost no social integration (The Rise of Christianity, 157-158). It was followers of Christ in the multi-ethnic church of Antioch (Jews, Africans, Arabs, Greeks, Romans, Syrians, Asians) who were first called Christians (Acts 11:19-26) and who took the gospel of Jesus Christ around the world (Acts 13:1-3). The gospel advanced as the Greco-Roman world stood in awe of the people who formerly hated each other because of ethnic distinctions, who now loved each other as family and worshiped and served together in the name of Jesus.

When we re-create Jesus and the biblical story in our own image, we ignore the gospel implications for how we are to understand racial and ethnic diversity as a cruciform community. Jesus is not colorblind and his followers must not be. Our differences are now seen in Christ, as celebratory markers of God’s expansive providential grace. The gospel does not erase our cultural, racial and ethnic distinctions, but rather reinterprets every aspect of our story in light of the gospel story (Rev. 21:24). The Christian community trades ethnocentricity for Christocentricity and is liberated to celebrate the breadth and length, height and depth of the love of Christ (Eph. 3:14-21).

In dominant white evangelical culture we often unwittingly proceed with a white Messiah attitude toward living out the demands of the gospel in our churches. Well-intentioned social ministry is often done with an off-putting aura of white evangelical aristocracy, albeit a benevolent one toward needy ethnic people. A local church unwilling to celebrate racial and ethnic diversity, interracial marriage, and transracial adoption, has a gospel problem. It is an inadequate justification for inaction to assert that intentionally pursuing a multi-ethnic congregation might disturb congregational peace. Jesus is at war with that kind of serpentine pseudo-peace.

We need to exorcise Jim Crow’s ghost that tragically still lingers in too many churches. “Separate but equal” was empty rhetoric used to defend cultural racial segregation in the 1950s and 60s. And it still is empty rhetoric when it is used to defend segregated churches today. The problem of latent racism will not be overcome by resolutions & conferences (though they have a place) but by integrated local churches. You do not need a platform at the Lincoln Memorial to do something about racial and ethnic segregation today. You already have the gospel and a local church.

Book Announcement: The Community of Jesus

In September, our friends at B&H Academic are publishing a book titled The Community of Jesus: A Theology of the Church, edited by Kendall Easley and Christopher Morgan. My SEBTS colleagues Andreas Köstenberger and Bruce Ashford are among the contributors. You can read what the publisher has to say about the book below. 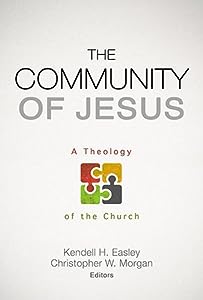 Intended for upper division college students, seminarians, and pastors, The Community of Jesus delivers a biblical, historic, systematic, and missional theology of the church.

Today the word church provokes wide-ranging reactions and generates discussion on a variety of issues among Christians and non-Christians alike. In order to sort through this maze of responses and topics, a biblical and theological foundation must be laid that provides a clear vision of the church of the Lord Jesus Christ and its significance in God’s eternal purpose.

With extensive pastoral, teaching, missions, and administrative experience, this team of contributors carefully sets forth the biblical teachings concerning the church and then builds on this core material, relating the theology of the church to salvation history, church history, God’s glory, and God’s mission:

The B&H Academic Blog has recently published two posts by co-editor Chris Morgan anticipating the book: “I Loved the Church but Hated Ecclesiology” and “The Church as A Showcase of God’s Plan for Cosmic Unity (Part I).” More posts are forthcoming in the next few days.

I’m really excited about The Community of Jesus. If you haven’t been paying attention, you ought to know that B&H Academic has regularly published some very helpful material in recent years on the topic of ecclesiology, including Mark Dever’s introductory text The Church: The Gospel Made Visible (2012), which I reviewed for The Gospel Coalition, and the edited volumes Believer’s Baptism: Sign of the New Covenant in Christ (2007),  Upon This Rock: A Baptist Understanding of the Church (2010), The Lord’s Supper: Remembering and Proclaiming Christ Until He Comes (2011), and Those Who Must Give an Account: A Study of Church Membership and Church Discipline (2012). Several current and former Southeastern faculty members and adjunct professors have contributed to one or more of these volumes, including Danny Akin, Bruce Ashford, Andy Davis, Nathan Finn, John Hammett, David Hogg, Köstenberger, Steve McKinion, and Ben Merkle.