Scott Kellum: What is the New Testament Canon (Part 1)?

[Editor’s Note: This post first appeared on August 7, 2012. In this four-part series, L. Scott Kellum, Associate Professor of New Testament & Greek at Southeastern, addresses the complex but very important question of the New Testament canon: why is there a New Testament; why are certain documents but not others included in the New Testament; and what does all this mean for ministry in the church and engagement with the world? Check in next Monday for part 2.]

Tell me if you’ve heard this one before. “The NT Canon (the authoritative collection of books) was formed over a period of sorting and sifting overseen by the Holy Spirit that was essentially completed by AD 200. The early church councils settled the fuzzy edges of the Canon.” This was what I heard as a young Christian. I suspect you’ve heard something similar. Upon further study I am convinced that this is at least 100 years too late in its date and places far too much emphasis on the church councils. This week I will address many aspects of the NT Canon to defend my thesis. In this post, I want to briefly explore the origins of the idea of a New Testament. Why did the early Christians endorse the idea of new Scriptures? If someone came to you and said, “we have new scripture for you,” you would rightly refuse it. Why is it that they did not?

Before we do that, however, let’s first correctly understand the early church councils. No evidence exists that the early councils actually debated the Canon. They only listed their books. If we evangelicals embrace the list in the councils we make two mistakes. First, to grant the councils the final word is to give too much authority to these councils. This is something evangelicals have always hesitated to do. Second, they also endorsed the OT Apocrypha as Scripture. If we take them as authoritative, we must also adopt these extra books to the OT. Again, we are on good grounds not to do so. Instead, it is better to evaluate the councils than submit to them. I think it is clear they were endorsing the Testaments as they were handed down to them in Greek. Regarding the NT, the choice is correct. In the OT, they were simply listing the books of the Septuagint that included these extra books. The councils, then, are best understood as a witness to our present 27-book NT.

So then, why were the early believers willing to accept roughly contemporaneous documents as authoritative Scripture? This question comprises two concepts. First, there is the very idea of Canon, i.e., a closed set of authoritative writings that in itself is authoritative. Second, when the question comes to the NT, why add to the OT Canon, which, by definition, is closed?

Because few works survive from the 1st and 2d centuries when these decisions happened, answering these questions is not easy. But there are works that do survive and what they explicitly cite and infer will help answer these questions. Examining the Church Fathers from before AD 150 we see every book of the NT cited as an authority. 3 John is often said to be missing, however, a few sources do show echoes of 3 John. So we see that the books in the present NT Canon were recognized, but what about the whole set?

Many scholars suggest the idea of a canon came from Marcion (a Gnostic-like heretic, expelled from the church of Rome c. AD 144). Marcion did produce a canon that was an edited edition of Luke and Paul’s letters. It is said that the early church’s response was a longer canon. This hypothesis, however, is coming under more and more suspicion in the academy. It is more likely that the origins of a Canon concept are earlier than Marcion. Irenaeus, writing only a few decades after Marcion and Tertullian, about 60 years later, both chastised Marcion for destructive not creative activity. Furthermore, some documents previous to Marcion are responding to the existence of an authoritative set of books. If so, it is most likely that Marcion was editing orthodox documents rather than “orthodoxing” documents.

So why is it a closed collection? Christians inherited the Canon concept from the Jews. So that Christianity already had a Canon: the OT. The Jewish historian Josephus contrasts the OT with a myriad of Pagan scriptures and notes that Judaism has a “fixed number of books.” Certainly sounds like “Canon” doesn’t it? The Second-century Christians not only had a Canon (the OT), there existed a body of literature that they recognized as NT Canon.

Yet it was not just a second-century phenomenon. It is clear that the new Scripture was being recognized very early. Both 2 Peter 3:15-16 (Paul’s letters) and 1 Timothy 5:18 (the Gospel of Luke) affirm new works as Scripture (equal with the OT). What led to this phenomenon?

I believe that the answer is found in understanding that the OT was “the book of the Covenant.” Ancient Near East covenants usually were accompanied by documents stipulating the terms. Within the OT, portions of it were called “the book of the covenant” (see, Exod 24:7; Deut 29:20; 31:9, 26; 2 Kgs 23:2, 21; 2 Chr 34:30). The same description can be found in Second-temple Jewish literature (see 1 Maccabees 1:56–57 and Sirach 24:23) referring to the whole OT. Thus, both the OT itself and later Jews considered the OT to be “book(s) of the covenant.” So then, with the advent of the New Covenant, covenant documents naturally would be expected. It is the prophesied New Covenant that is the impetus for new Scriptures (covenant documents).

This explains a few things for us: 1) the rapid recognition of apostolic documents as Scripture, 2) the limitation to apostolic men as authors for they were the witnesses of the covenant, and 3) it also explains the name of the collection. We are used to “New Testament,” but the title in Greek “he kaine diatheke” is better translated, “the New Covenant.”

Thus, the idea of a NT Canon was not the result of the councils, or a reaction to a Roman heretic. Instead, the NT flows organically from the establishment of a new covenant, predicted by the OT prophets, and instituted in and through the Lord Jesus Christ himself. He is the very fount, not only of all Christian blessings, but also of the NT Canon.

J. D. Greear on Three Reasons to Read Your Bible

Every Thursday afternoon we highlight the writing of J. D. Greear, Pastor of The Summit Church in Raleigh-Durham, North Carolina. This Thursday we point you to a recent post from J. D. on three reasons we must read our Bibles.

Jesus was asked a lot of questions during his earthly ministry, and not once did he ever say, “You know, I get why you’re confused. The Old Testament is just so unclear.” No, he repeatedly peppered his opponents with the question, “Haven’t you read?” suggesting that if they had just known their Scriptures better, they wouldn’t have been making the mistakes they were making.

We won’t be able to understand everything. We’ll still have questions. And that’s fine. But what we need to know for life is plain.  The problem isn’t so much that there are parts of the Bible we can’t understand, but that we won’t obey the parts we do understand.

Andy Davis on Christ’s View of the Bible 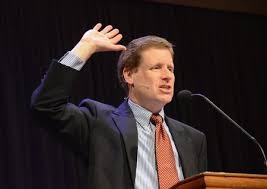 Regular readers may know that I serve as one of the elders of First Baptist Church of Durham, North Carolina. My fellow elder Andy Davis, who serves as our church’s senior pastor, has recently finished writing an eleven-part series of short essays on Christ’s view of the Bible. He also serves as a visiting professor of historical theology at Southeastern Seminary, where he teaches courses on Jonathan Edwards, the Puritans, and John Calvin. Andy’s series was published at Two Journeys, a blog sponsored by FBC Durham that focuses primary on matters of practical theology and church health. Many of the elders and ministry staff contribute to Two Journeys.

In a day when a growing number of evangelicals seem confused (again) about the inspiration, authority, and truthfulness of Scripture, Andy makes the case that Jesus suffered from no such confusion. Even Southern Baptists, who endured our own “battle for the Bible” in the 1980s and 1990s, need to be reminded about Jesus’ view of the Scriptures. To that end, I hope you find Andy’s series helpful.

What is Christ’s View of the Bible? Introduction

Christ Would Rather Die than Disobey Scripture

Christ Taught that He Fulfilled Scripture

Christ Taught the Unbreakable Permanence and Authority of Scripture

Christ Staked His Life on the Word of God

Christ Proved His Deity by a Single Word of Scripture

Christ Proved the Resurrection by a Single Verb Tense in Scripture

Christ Instilled Passion for the Scriptures in His Followers

What is Christ’s View of the Bible? Conclusion

If you would like to read a helpful book that presents a traditional evangelical doctrine of Scripture, I would highly recommend D. A. Carson’s Collected Writings on Scripture (Crossway, 2010).