Greg Welty: What is a “Christian Worldview”?

Editor’s Note: Greg Welty is Professor of Philosophy at Southeastern and holds the D.Phil. from the University of Oxford. As one well qualified to think, talk, and write about the intersection of Christian theology and philosophy, we asked Dr. Welty to explain a “Christian worldview.” This is an edited version of a post which originally ran in 2012.

“Christian worldview” is a trendy term among evangelicals. But what does it mean and why should we care? Let’s consider three questions about the term that can occasion clearer thinking about the topic.

Is “Christian worldview” a misleading term? After all, the world is a pretty big place, almost unimaginably big. Isn’t it impossible to ‘view’ all of it at once? There are at least a billion facts about the table in front of me that I do not know and will never know. So at best a worldview is a fragment or subset of knowable facts that are out there. Which facts should be included in a ‘worldview’ and why? It’s not as if God explicitly lists for us, in Proverbs or Ephesians, which propositions should make the cut. (The term ‘worldview’ doesn’t even appear in the Bible.)

Is “Christian worldview” redundant? Christians already hold that whatever God has revealed for us to believe, we should believe it – full stop. God is creator, providential sustainer, redeemer, and judge, and whatever he has done in these or any other capacities we should believe he has done, and live in light of it. And we already have terms that convey this fundamental idea: ‘theology,’ ‘biblical doctrine,’ ‘systematics’. How does ‘worldview’ add to this notion in a helpful way? If a “Christian worldview” is just my believing whatever God tells me to believe, then it’s not clear why I need a separate class on this in seminary.

Is “Christian worldview” trivial? Let’s recognize that there is now a tradition of reserving the term for Christian teaching on broad themes that intersect with the main areas of philosophy. Worldview is metaphysics, epistemology, and ethics, and Christian worldview is what God says on those topics. This seems to narrow things down:

3)    Ethics is about whether there are objective norms for human behavior, and if so, in what do they consist? (Rules? The best means to the best ends? The cultivation of virtue?) Relativism – the view that all ethical norms are relative to individuals or cultures – and nihilism – the view that there are no norms at all – are both false.

But by narrowing things down to what the Bible unambiguously teaches us in metaphysics, epistemology, and ethics, don’t we border on triviality? “Don’t be a solipsist! Don’t be a global skeptic! Don’t be a relativist or nihilist!” These preach well, but they are pretty thin gruel for Christian growth and guidance. It’s not even clear they’re distinctively Christian claims. (Lots of non-Christians believe these things). Is this handful of truisms all we can say on the topic of philosophy? And how many genuine solipsists, global skeptics, and relativists/nihilists are out there anyway?

Thankfully, “Christian worldview” doesn’t have to be misleading, redundant, or trivial. It does involve getting the right answers on matters of being, knowledge and value, and being able to explain why they are the right answers. But it goes far beyond this. A Christian worldview is about using all the resources of Scripture to illuminate the whole range of traditional philosophical disputes, by opening up theological avenues of insight and argument typically neglected in a secular context. It’s not that we’re limited to citing isolated Bible verses in an attempt to decide technical philosophical disputes (although if a verse does speak clearly and relevantly to any question, then go for it!). Rather, as Christian philosophers we seek to show again and again how the existence of the triune, incarnate God who has created all things for his glory and who is reconciling all things to himself matters for how we address the deepest questions of being, knowledge, and value. This God is not a new dashboard ornament we add to our collection, a thing among many other things we can believe in. He is the One in whose light we see light, and in whose absence all is darkness.

Space permits just one example. A perennial philosophical dispute is over the existence and nature of ‘universals’. What is justice? What is goodness? What is wisdom?

1)    Are these just words, bits of language we’ve invented for various practical purposes, labels that at best refer to subjective ideas in our head but which have no reference to anything existing distinct from us or independent of us? (That would be nominalism.)

2)    Do ‘justice,’ ‘goodness,’ and ‘wisdom’ instead refer to something that only exists in individual things and nowhere else? (That would be ‘moderate’ or Aristotelian realism.)

3)    Do they refer to something that exists over and above us and everything else in the world, something that would exist even if there was no physical world at all? (That would be ‘extreme’ or Platonic realism.)

4)    Or is there room for an additional view here, the view that universals are in some way true ideas in God’s mind that he has by nature, true ideas that God has of his nature and power? This would be a God-centered view of universals that combines the best of the preceding views.

So God is the exemplar of justice, goodness, and wisdom. Creatures only have these things insofar as they imitate God, the standard. Suddenly the most abstruse debates of the ancient, medieval, and modern periods become matters to which a theologically-informed ‘worldview’ can speak, and in a way that displays how our faith contrasts with other ‘faiths’. This contrast isn’t misleading, redundant, or trivial, and it exists in dozens of other areas besides this one.

This is ‘faith seeking understanding’: by faith we already believe that God exists and that he has ideas of his nature, but our faith seeks further understanding of how these and similar truths can help illuminate a whole range of inquiries about the world. In this way Christian philosophy (or a “Christian worldview”) becomes a pathway to intellectual maturity, by repeatedly leading us to see that God is at the center and not the periphery, no matter the subject of discussion.

So, to summarize: I don’t think there is a consensus on the meaning of the phrase ‘Christian worldview,’ and so I’m not going to pretend that there is. But above I have set forth two understandings of the phrase that I think are useful:

‘Christian worldview’ (meaning 2): Christian worldview is more of an activity we engage in rather than a set of Post-it notes we memorize. A Christian worldview is about using all the resources of Scripture to illuminate the whole range of traditional philosophical disputes, by opening up theological avenues of insight and argument typically neglected in a secular context. I illustrated this activity in one way above, but the number of ways is potentially limitless.

Hiroo’s Dilemma and the Problem of Belief

“On March 9, 1974, Japanese Lieutenant Hiroo Onoda walked out of the jungle of on a remote island in the Philippines, finally convinced that World War II was over–29 years after it had ended. Trained as an intelligence officer in guerrilla warfare, he was told to survive at all cost. No matter what happened, his superiors would come for him.

Just a few months after his arrival in 1944, the allies overwhelmed Japanese defenses, and Hiroo’s band of five hid deep in the jungle, surviving on what they could find. When the war ended many attempts were made to find and convince the remaining soldiers to come out. Newspapers and even letters from relatives were left, which they found, along with the leaflets. But how could the war have ended so quickly? And why were there spelling errors in the leaflets? Hiroo’s own brother even came and attempted to speak to him over a loudspeaker. The band considered each piece of evidence, and always concluded that the enemy was trying to deceive them. One by one they died, the last one after 27 years in hiding, leaving Hiroo alone.

Finally, a Japanese student tracked Hiroo down and befriended him. He could not surrender, Hiroo explained, until his commanding officer ordered him to do so. The student returned to Japan, and the government found his commander, now a bookseller, who returned in his tattered uniform and personally gave the order. Hiroo, still in his uniform, with sword on his side and his working rifle in his hand, was relieved of duty, and wept. Philippine president Ferdinand Marcos pardoned him for the approximately 30 people he had killed over the years, because the soldier had believed he was still at war. Hiroo returned to a world vastly changed, realizing that his beliefs had been completely wrong for nearly 30 years.”

In his book Mapping Apologetics, Brian Morley opens with the above illustration. 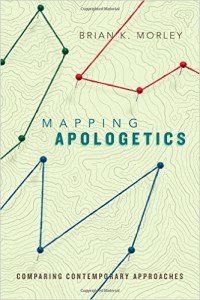 Hiroo, Morley explains, illustrates the problem of belief. What should be accepted as evidence? How should one weigh assumptions? When it comes to whether or not to have faith in God, Christ, and the Bible “[t]here could not be a more important question than how we are to decide what to believe.” Morley covers apologetics approaches ranging from Fideism to Rationalism, in between examining basic approaches such as Presuppositionaliam and Evidentialism. I highly recommend his book.

Morley concludes that evidence does play a role in a biblical faith, “[but] it seems that we do not need 100-percent proof in order to have 100-percent faith” (353). The Bible teaches that all creation testifies to the existence and nature of God (Rom. 1:20). Due to human fallenness, this witness is suppressed, distorted, or ignored. This does not mean that the human mind is incapable of grasping truth. Offering arguments for the Christian faith is an entirely legitimate approach because the Holy Spirit works through believers when they make the case for faith (364). The persistent presentation of the truth can eventually win the day. Even Hiroo came to see the light.

Thumbs Up for “Risen”–Way, Way Up

In 2003, Fiennes portrayed Martin Luther in Luther, and he will play Eric Liddell in The Last Race, which is scheduled for release later in 2016. The Last Race is a sequel of sorts to Chariots of Fire, and tells the story of Liddell’s missionary service in China and his eventual martyrdom.

In Risen, Fiennes plays the part of Clavius, a military tribune who serves in the Roman army in Judea during the days of Pontius Pilate. Pilate has charged him with the task of finding the body of Jesus of Nazareth, which has disappeared three days after his crucifixion. Fiennes portrays the hardbitten soldier with understated determination, which makes his performance very effective.

Hollywood finally realizes that the market for faith-based films is a lucrative vein to be mined. A least half of the previews shown before Risen have explicitly Christian themes. Generally the choices have been either theologically aberrant or even abhorrent (The Last Temptation of Christ, or The DaVinci Code as examples) or simply cheesy (God’s Not Dead comes to mind). With Risen, Hollywood gets it right. The sets, the acting, the production values are all top-notch. The story is original and entertaining. Most importantly, Risen faithfully tells the gospel message. This is a great Easter movie. Thumbs up for Risen–way, way up.