Some Disturbing Facts about the Lottery

Recently a $1 billion Powerball jackpot sent the nation into a frenzy. An article in The Week magazine entitled “Addicted to Lotteries” (02/12/16 p. 11) presents some sobering facts about our country’s “harmless” obsession. 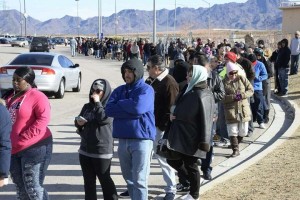 People waited in 3-hour lines during the latest Powerball frenzy

“While the lotteries spend millions promoting their games as harmless entertainment and encouraging people to imagine themselves quitting their jobs and buying mansions–‘Hey, you never know,’ reads the New York lottery’s tagline–studies show that poorer players are 25% more likely than richer players to consider a ticket a genuine investment, and to vastly overestimate their chance of winning.”

The article concludes that lotteries are “just a tax in disguise” designed to exploit the poor. I have to agree.

Bruce Ashford: A Helpful Series on the Anti-Gospel of the Alt-Right

Follow In a recent discussion at The Library at Southeastern, Dr. Bruce Ashford sat down with Dougald McLaurin to answer questions about engaging in political discourse as a Christian. Watch the full video below.

Follow Craig Bartholomew, Professor of Religion and Theology at Redeemer University, grew up in South Africa. In a luncheon at Southeastern Seminary, he addressed racism, ministry, preaching, and modernity. Dr. Bartholomew shared some of what he learned ...

The Virtues of Capitalism – Scott Rae

Follow Scott Rae, Professor of Christian Ethics at Biola University in La Mirada, CA, recently presented a lecture titled “The Virtues of Capitalism” at Southeastern Seminary. In it, he addressed income inequality, economic theory and why pastors need...