What Percentage of Americans Are Evangelical?

During this election cycle a great deal of attention has been given to the evangelical vote. And for good reason: evangelicals are believed to make up 20% of the voting electorate. However, counting the number of evangelicals has always been a challenging task. 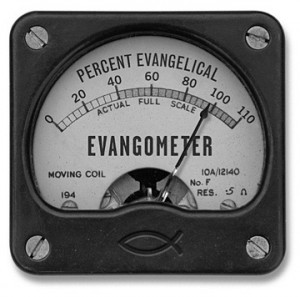 Some evangelicals attend mainline denominational churches, and not everyone attending evangelical churches hold to what are typically considered evangelical distinctives. And to make things even more complicated, some who hold to evangelical beliefs do not self-identify as evangelicals. Leith Anderson and Ed Stetzer, working with a group of evangelical leaders, came up with four belief statements that appear to identify evangelicals when used in a questionnaire. They report their findings in the latest issue of Christianity Today (April, 2016) in “A New Way to Define Evangelicals” (pp. 52-55; the online version can be found here).

The four belief statements are:

“The Bible is the highest authority for what I believe.”

“It is very important for me personally to encourage non-Christians to trust Jesus Christ as their Savior.”

“Jesus Christ’s death on the cross is the only sacrifice that could remove the penalty of my sin.”

“Only those who trust in Jesus Christ alone as their Savior receive God’s free gift of eternal life.”

Older
Exploring Hope Podcast: A Discussion About Theology and Culture with Bruce Little
Newer
Marriage, Divorce, Remarriage and the Gospels

Follow Michael Bird, a lecturer in Theology and Czar of Postgradistan at Ridley College in Melbourne, and Bruce Ashford, Provost and Professor of Theology and Culture at Southeastern Seminary, participate in The Evangelical Voices in the Academy Lecture S...

Why All Good Christians Should Celebrate Halloween

Follow Editor’s Note: This post originally appeared in 2009. Since we are once again approaching Halloween, George Robinson’s (Richard and Gina Headrick Chair of World Missions and Professor of Missions and Evangelism) thoughts on Christian participat...

Follow Bruce Ashford, Provost and Dean of Faculty at Southeastern Seminary, preaches on how as believers we must not bow to any ideology other than Christ as King.