Did you know that some Baptists in the 1850’s predicted that all evil would be stamped out by 2016? David Bebbington’s book, Baptists Through the Centuries, highlights the optimism many 19th-century Baptists had about the future. 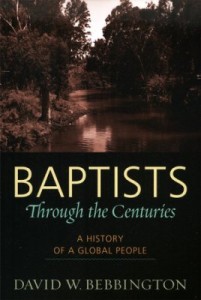 Like most evangelicals of that time, a majority of Baptists held to Postmillennialism (Premillennialism did not become the predominant view until the 20th century). In 1854, the General Baptist Magazine published an article, “The Millennium: It’s Nature and Blessings.” Bebbington cites the article as an example of the cheerful hopefulness of that era:

“Most Evangelicals of the nineteenth century professed postmillennialism, the belief that conditions would improve as a result of the preaching of the gospel so that the second coming would not take place until the world was fit to receive its king….With railroads, steamships, and the electric telegraph abolishing distance, progress seemed a reality. These innovations were regarded as harbingers of the millennial glory. In 1854 the English General Baptist Magazine was sanguine about the prospects of the world as the millennium approached. The gospel would triumph, war would cease, and famine would be no more. Crime, drunkenness, ‘lewdness,’ slavery, oppression, scandal, loose talk, false teaching, idols, popery, and paganism would all be swept away. There would also be an end to ‘the oppressive weight of taxes that grind nations to the dust.’ The author of the article expected that this formidable set of changes could be accomplished by 2016.” (Bebbington: 2010, 125)

Why 2016? How did the article’s author arrive at predicting this particular year? Bebbington doesn’t say. I suspect the author would be disappointed with the real 2016. A couple of takeaway thoughts:

Date-setting is a very bad idea. This should be obvious, but evidently it isn’t. So many throughout church history have hazarded predictions concerning the date of our Lord’s Second Coming. This is despite His warning that no one knows when He will return (Mark 13:32).

We need to recognize that our cultural context can affect our eschatology more than we might want to admit. There are reasons–cultural reasons–why the early Church was predominantly Premillennial, the Medieval Church was mainly Amillennial, the Puritan through Victorian eras were mostly Postmillennial, and now the Modern era has seen a resurgence of Premillennialism. Christians of each era tended to interpret Bible prophecy through the lens of their respective milieu. We must strive to hold the Bible as the final authority in our theology. One way to move towards that goal is to be aware just how much our environment can affect our viewpoints.

This blog was cross-posted at www.theologyforthechurch.com

Older
Why is Church so Important?
Newer
Theologians Reading the Gospels: Steve McKinion – The Jesus of the Gospels as the Christ of Scripture