A Nation of Heretics

Ross Douthat published Bad Religion: How We Became a Nation of Heretics three years ago (2012), but I’m just getting around to reading it. Now I find I can’t put it down. 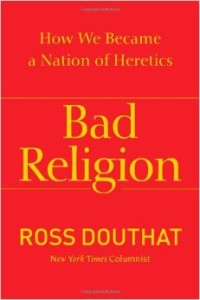 He describes the time of post-WWII America as a quasi-golden era for the Church. Four religious figures exemplified, respectively, the four foremost religious movements of the 1940s and 50s: theologian Reinhold Niebuhr and his intellectually stimulating neo-orthodoxy, evangelist Billy Graham and his new brand of evangelicalism, Bishop Fulton Sheen and his warm-hearted Roman Catholicism, and Martin Luther King and his prophetic call for civil rights.

But between the 1960s and the current day, explains Douthat, something went seriously wrong:

The Protestant Mainline’s membership stopped growing abruptly in the mid-1960s and then just as swiftly plunged. Of the 11 Protestant churches that claimed more than 1 million members in the early 1970s, eight had fewer members in 1973 than in 1965. There were 10.6 million United Methodists in 1960, more than 11 million at mid-decade, and 10.6 million again my 1970 – and it was down, down, down thereafter. The Lutherans peaked in 1968, Episcopalians in 1966, and the United Church of Christ in 1965; by the middle of the following decade, they were all in steep decline. The Presbyterian Church (U.S.A.) Lost about 1.5 million members between the mid-1960s and the late 1980s. By the 1990s, 60% of Methodist parishioners were over 50, and there were more Muslims in America than Episcopalians. (59)

One would think that the decline might have been merely the result of the country becoming more secular. However, the evidence indicates that during the last half of the 20th century the nation became more religious. “Belief in God, an afterlife, and intercessory prayer remained constant or even rose during these years (Americans were slightly more likely to believe in life after death in the 1990s than in the 1960s)” (62).

No, America is didn’t stop believing; rather, its beliefs became skewed. Orthodoxy was replaced with worship of “the god within”, the prosperity gospel and American nationalism. The message of the Cross was abandoned in favor of moralistic therapy. Douthat describes the present spiritual state of the nation thusly:

United States remains a deeply religious country, and most Americans are still drawing some water from the Christian well. But a growing number are inventing their own versions of what Christianity means, abandoning the nuances of traditional theology in favor of religions that stroke their egos and indulge or even celebrate their worst impulses. These faiths speak for many pulpits –conservative and liberal, political and pop-cultural, traditionally religious and fashionably “spiritual”–and many of their preachers call themselves Christian or claim a Christian warrant. But they are increasingly offering distortions of traditional Christianity, not the real thing.
… This is the real story of religion in America. For all its piety and fervor, today’s United States needs to be recognized for what it really is: not a Christian country, but a nation of heretics. (4-6)

America has always had its share of groups at the margins–Quakers, Shakers, Mormons, and Millerites. Douthat argues that the difference this time is the weakest of the orthodox center. Mainline Christianity wasn’t prepared to handle the pressures of late 20th century: political polarization, the sexual revolution, globalization, increasing wealth, and the rise of a new cultural elite that considered the Christian faith déclassé.

Douthat is Roman Catholic, and there are places where I would have said things differently. Still, I highly recommend the book.

Older
What is the Doctrine of the Trinity?
Newer
Kingdom Diversity Podcast: Stephen Hurd