Calvinists Believe in Free Will Too

Every once in a while someone will say that Reformed theology rejects the notion of human free will as an “Arminian heresy”. 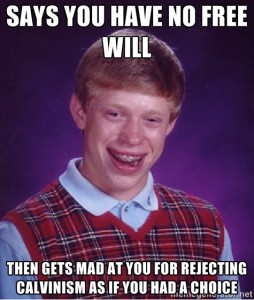 But a quick survey of various Reformed confessions reveals that Calvinists hold to free will also. For example, the Founders affirm the Abstract of Principles, which are part of the confessional documents of both Southern and Southeastern Seminaries. Note the section on “Providence“:

“God from eternity, decrees or permits all things that come to pass, and perpetually upholds, directs and governs all creatures and all events; yet so as not in any wise to be author or approver of sin nor to destroy the free will and responsibility of intelligent creatures.”

Another example is The Westminster Confession, which most Presbyterians affirm. In “God’s Eternal Decree“, it states:

“God from all eternity, did, by the most wise and holy counsel of His own will, freely, and unchangeably ordain whatsoever comes to pass; yet so, as thereby neither is God the author of sin, nor is violence offered to the will of the creatures; nor is the liberty or contingency of second causes taken away, but rather established.” (3.1)

Later, under the heading “Of Free Will”, the Confession states:

God has endued the will of man with that natural liberty, that is neither forced, nor, by any absolute necessity of nature, determined good, or evil. (9.1)

There is one important area that Calvinists don’t believe humans to have free will: the ability to turn to God. But (and this is the important point) neither does any other orthodox Christian. Even Roman Catholicism and Eastern Orthodoxy rejects the semi-Pelagianism heresy that humans, apart from divine grace, have the natural ability to seek, turn, or want God.

The Second Council of Orange (529) (which is accepted as authoritative both by Catholics and the Orthodox) rejected semi-Pelagianism. The Council declared:

“If anyone denies that it is the whole man, that is, both body and soul, that was ‘changed for the worse’ through the offense of Adam’s sin, but believes that the freedom of the soul remains unimpaired and that only the body is subject to corruption, he is deceived by the error of Pelagius and contradicts the scripture….” (Canon 1).

“If anyone affirms that we can form any right opinion or make any right choice which relates to the salvation of eternal life, as is expedient for us, or that we can be saved, that is, assent to the preaching of the gospel through our natural powers without the illumination and inspiration of the Holy Spirit, who makes all men gladly assent to and believe in the truth, he is led astray by a heretical spirit, and does not understand the voice of God….” (Canon 7).

The Second Council of Orange made many comparable statements. Apart from grace, salvifically speaking, the human will is in bondage.

I’m not trying to paper over the differences between Calvinists, Lutherans, Molinists, Arminians, and other Christians. All affirm the reality of human agency. The respective groups disagree primarily about how grace operates on the human will. About that there is much debate. But there is common agreement–even among Calvinists–that a human being, because he or she is created in the image of God, possesses a will which that person owns.

Older
What Hath Nature to do with Grace? An Exploration of the Bible’s Place in Higher Education.
Newer
Power Encounter—of the Wrong Kind