Book Review: Formed for the Glory of God 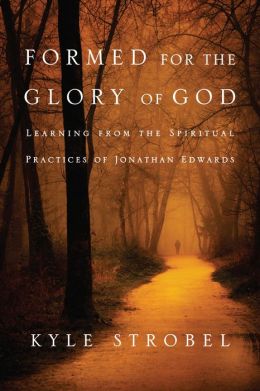 Of the writing of books about Jonathan Edwards there is no end. Nearly every month it seems that at least one new book appears. Some of these works are technical monographs written by scholars, while others are popular devotional books or biographies written by pastors. This isn’t counting the dozens of journal articles, book chapters, and dissertations about Edwards that are written every year.

One of the most helpful books I’ve read about Edwards in recent months is Kyle Strobel’s Formed for the Glory of God: Learning from the Spiritual Practices of Jonathan Edwards (IVP, 2013). Strobel is a theologian with expertise in both Edwards’s theology and Christian spirituality. These two emphases are brought together in this delightful book, which is a handbook for spiritual growth that uses Edwards as the central dialog partner. Formed for the Glory of God isn’t a dry academic study of spirituality; Strobel argues that “Christian spirituality is ultimately about the work of the Spirit to bind us to the Son in love” (p. 13). Strobel believes that Edwards is a great role model for a healthy evangelical spirituality. He writes, “In Edwards’s grasp of spiritual formation we find a well-rounded account of following Christ, an account that deserves to be meditated upon in our day as much as in his own” (p. 15).

Strobel divides his book into two parts that cover seven chapters and four appendices. Chapter one shows how Edwards’s spirituality focused upon the Christian life as a journey toward the beatific vision of God that will occur when we are glorified in the next life. When we become Christians, we are given a new spiritual sight that guides us in this pilgrimage and begins to fit us for heaven, where we will forever be in the presence of our Creator and Redeemer. The second chapter roots Edwards’s spirituality in his evangelical view of salvation as a personal, covenantal relationship with the Triune God. When we believe, God forgives us of our sins, adopts us into his family, and empowers us for the journey toward the beatific vision. Chapter three discusses Edwards’s view of the affections, which is a central theme in his thought. Through faith, God communicates himself to us, renewing our hearts and redirecting our intellect, emotions, and will in a Godward direction. To say it another way, our internal compass, which has been distorted by sin, is recalibrated to the True North of God’s glory in Christ.

Part two begins with chapter four, which looks at Edwards’s understanding of the spiritual disciplines as a means of grace. The Word of God and prayer are spiritual disciples (or postures, as Strobel prefers) that orient our hearts toward God and his gospel. God works through these disciplines to draw us closer to him and grow us in holiness. Chapter five looks at the relationship between knowledge of God and knowledge of self, a traditional Reformed theme dating back to Calvin himself. Honest self-awareness and self-examination leads us out of the deception of false humility into the grace of true spiritual humility. Chapter six examines Edwards’s commitment to the Puritan practices of Scripture-saturated, prayerful meditation, which in turn leads to greater contemplation of God and his ways. These emphases are where head, heart, devotion, and spiritual happiness intersect for God’s glory.

Chapter seven examines a handful of other spiritual practices that were central to Edwards’s spirituality. Examples include observing the Sabbath (for Edwards, the Lord’s Day), fasting (both personal and, especially, corporate), a focused form of spiritual accountability called “conferencing,” an approach to self-examining prayer called “soliloquy,” silence and solitude, and personal times of prayer. Strobel includes helpful descriptions of these disciplines and suggestions for how contemporary believers might imitate them. The appendices provide further suggestions along these lines and introduce readers to Strobel’s ongoing “Jonathan Edwards Project,” a series of books of varying levels of difficulty that are meant to complement one another.

Let me cut to the chase: I really like Formed for the Glory of God. I see four particular strengths to the book. First, while it is well-researched, this is not a scholarly book. Strobel is writing for the church more than he is for Edwards scholars. Second, Strobel’s exposition of spiritual formation and spiritual disciplines avoids the incipient legalism that too often accompanies books of this kind. Strobel’s basically Reformed assumptions keep the means of grace rooted in God’s initiative in every step of the Christian journey, from regeneration to glorification. Third, Strobel demonstrates how Edwards is a role model for evangelicals who care about practices such as fasting, meditation, and silence, but want to avoid more mystical (in the bad sense) approaches to these disciplines. Finally, Strobel shows how Edwards’s  spirituality arose from and reinforced his theological convictions; Scripture guided experience, which confirmed Scripture. My only mild complaint about Strobel’s book is the lack of an index, which would have made it even more accessible.

Formed for the Glory of God is an informative and practical introduction to Jonathan Edwards’s spirituality. It is also a useful primer to Christian spirituality, particularly for readers who consider themselves evangelical and/or Reformed in their convictions. The book is an excellent resource for church staffs, church reading circles, seminary and college courses, or personal devotional reading. Readers interested in the writings of authors such as Dallas Willard, Richard Foster, and Donald Whitney will especially enjoy learning from the spiritual practices of the most influential pastor-theologian in American history. I will be recommending it to my students.

(Note: This post is cross-published at Christian Thought & Tradition)