Recommended: New Edition of Brothers, We Are Not Professionals 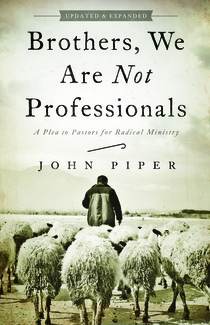 When I was a seminary student, John Piper published a book titled Brothers, We Are Not Professionals (B&H, 2002). I remember reading through it shortly after it came out. Piper argued that the spirit of professionalization was choking out authentic gospel ministry among pastors. Even then, as a seminarian with a burgeoning interest in Baptist history, I understood that Southern Baptist pastors had drunk deeply from the well of professionalization. Piper suggested that pastors should focus more on those matters that are spiritual and eternal, recovering a radical view of ministry that speaks prophetically to the anemic, professionalized ministry that pervades American evangelicalism.

I was delighted to learn that Piper has published an updated and expanded edition of Brothers, We Are Not Professionals (B&H, 2013). It has been a joy to revisit this excellent book in the past few weeks. I’ve been encouraged by some of my favorite chapters from the first edition. Pastors can’t be reminded too often that God’s uppermost concern is his own glory, that he is most glorified in us when we are most satisfied in him, and that we must avoid the “debtor’s ethic” of attempting to pay God back in gratitude for all he has done for us in Christ. I also enjoyed being reminded of Piper’s emphasis on reading Christian biography, keeping up with the original languages (Bitzer the Banker makes Finn the Professor look like a rube in this regard), and praying for the seminaries. These continue to be some of my favorite chapters.

But I also enjoyed reading the six new chapters that Piper has written for this new edition. In chapter four, Piper shows that God’s delighting chiefly in his own glory most emphatically does not mean that he does not delight in us. Piper has been frequently been misunderstood on this very point, so I appreciate this addition. In chapter six, Piper summarizes the argument of his excellent book God is the Gospel. The greatest gift bestowed upon us in the gospel isn’t forgiveness of sins or eternity in the new heavens and earth, but God himself. In chapter thirteen, Piper takes on (mostly younger) preachers who seem more concerned with entertainment than being rigorously biblical. We pastors need to let the Word do the work, especially in an entertainment-saturated culture.

In a closely related theme, chapter eighteen urges us to let the text set the tone for the sermon. Some pastors are almost always chippy when they preach, while others are uniformly somber and serious. I think it’s safe to say the greater temptation for most is the former. But the Bible speaks to us in many ways, and the sermon needs to be shaped by the text that is doing the speaking. In chapter twenty-two, Piper opens up about some of his own sin struggles and urges pastors to mortify their besetting sins by the power of the gospel for the sake of their own souls and those of the people to whom they minister. In chapter twenty-seven, Piper urges pastors to take care of their bodies through diet and exercise—a needed and helpful word for many of us, myself included. Healthy bodies not only normally contribute to longer life, but they also help produce sharper minds.

I’m very grateful for John Piper’s ministry and for his willingness to revise and expand Brothers, We Are Not Professionals. One of the very best books on pastoral ministry is now even better. I would highly recommend that every pastor and seminary student read this book. In it, you will find some of the best of Piper’s theology and emphases in summary form, directly applied to faithful pastoral ministry.

If you want to learn more about the book, consider the following two videos. The first is a promotional video Piper filmed. The second is a conversation about the book between Piper and David Mathis of Desiring God Ministries.

(Note: I appreciate the publisher providing me with an advanced copy of Brothers, We Are Not Professionals for me to review for Between the Times.)

For Pastors: How to Vet Potential Counseling Referral Sources

Follow By Brad Hambrick Editor’s note: Brad Hambrick serves as Pastor of Counseling at The Summit Church and Instructor of Biblical Counseling at Southeastern Baptist Theological Seminary. Since he felt that this post would be beneficial to pastor...

New Book: Entrusted to the Faithful