Church Tradition records that in the year 269 or 270 AD (the historical record is unclear), a young man living in the Roman Empire saw something that changed his life—and influenced western civilization for close to 1800 years. 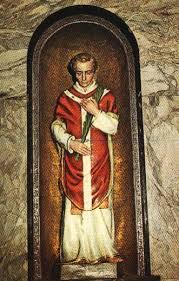 While not a Christian himself and uncertain of his own beliefs, this young man saw something profound and intriguing in the lives of his Christian friends.  The mere fact that his friends were Christian made them objects of state-sanctioned wrath and persecution under the emperor, Claudius. And yet, even while persecuted for their faith, their love and devotion toward one another and toward him was astonishing.

Honored by their friendship, and intrigued by their faith, this young man voluntarily aided his Christian friends to such an extent that, even though not a Christ follower himself, he was eventually imprisoned along with them.

It was there, while he was alone and afraid in a Roman jail, that his Christian friends visited him, and this young man, whose name was Valentine, finally understood and embraced the Christian gospel.

It was not long after his conversion that the Roman officials presented Valentine with a choice: recant your faith and be freed or refuse and suffer the consequences. He refused.

As tradition would have it, he was then clubbed to death on February 14th.

Before he died, however, he is said to have sent a message to his Christian friends saying: “Remember your Valentine… I love you”

Ultimately, no one is quite sure of the exact details of the origination of the Valentine’s Day tradition, but one thing that is sure is that a Christian by the name of Valentine was martyred for his faith in the year 269 or 270.

The truly curious thing, however, is that a day originally meant to commemorate the simple, yet stunning faith of a Christian believer willing to sacrifice his life instead of denying his faith has been reduced to a day that commemorates trivial crushes with heart-shaped candies and a rather strange, almost naked, bow-and-arrow toting, pagan Greek god named Cupid.

Sadly, the pure message of the life-altering good news that Jesus Christ died on the cross and rose from the dead as a way to offer payment for our sins and enable a new life based on faith in God and his promises has become little more than a holiday that serves as a litmus test of puppy love.

Perhaps this Valentine’s Day, amidst the hearts, flowers, cards, and guilt-motivated purchases of candy, it might be a blessing to take a moment with your sweetheart and consider the real meaning of this special day.

Why would Valentine die for his faith?

Perhaps Romans 5:8 holds the answer: it is because “God demonstrates His love for us in this, that while we were yet sinners Christ died for us.”

And that kind of love is so compelling, so stunning, so simple, that when we “get it,” it is worth living for…and it is worth dying for.

Living and dying for that kind of love makes a lot more sense than trying to get a diaper-clad, puny god to shoot a love arrow at one’s latest crush.

Mark Liederbach is Professor of Theology, Ethics, and Culture at Southeastern Baptist Theological Seminary. He also serves as Vice President for Student Services and Dean of Students, and is a Research Fellow for the L.Russ Bush Center for Faith and Culture.