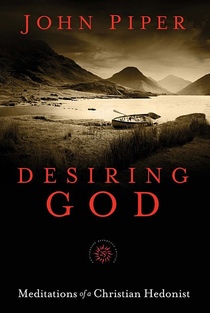 Like perhaps many readers of Between the Times, I have been profoundly, positively influenced by the ministry of John Piper. I first heard Piper preach at a Passion Conference in 1999. I don’t recall having ever heard preaching with such authority. After that session, I went to the bookstore and bought three of his books. Over the years, I’ve probably read about 2/3 of Piper’s books, along with dozens of his shorter writings. I firmly believe that every Christian should read as much John Piper (and Jerry Bridges) as possible. This stuff feeds your soul.

One of the many things I appreciate about Piper is that he makes many of his resources free through Desiring God Ministries. While I could recommend many such free resources, I’ve chosen to highlight two that I think readers of this blog will find particularly helpful. If you’ve already read these books, consider this your invitation to read them again. These books are worthy of more than one close read.

Desiring God: Meditations of a Christian Hedonist is Piper’s best-known book. It was first published in 1986 and has subsequently been revised three times, most recently in 2011. In Desiring God, Piper coined his famous (and controversial) phrase “Christian hedonism.” He argues that God is most glorified in us when we are most satisfied in him. Playing off of the Westminster Shorter Catechism, Piper also claims that the chief end of man is to glorify God by enjoying him forever. You can download a free PDF of the 2003 edition of Desiring God from the Desiring God Ministries website.

When I Don’t Desire God: How to Fight for Joy was written in 2004. Piper understands that sometimes we don’t feel like desiring God above everything and everyone else. Sometimes we don’t want to be “most satisfied” in God or enjoy him for a minute, let alone forever. Often, God’s glory is the furthest thing from our minds. If you ever feel that way, then this book is for you. You can download a free PDF of When I Don’t Desire God from the Desiring God Ministries website.

If you own an e-reader such as a Kindle or iPad, or if you are one of those crazy people who likes to read things on your computer screen, then these two free books are a far better bargain than anything you paid for on Black Friday. Many thanks to John Piper and Desiring God Ministries for making so many great resources freely available on their helpful website.